“The car is a milkcow the government greedily milks” is what our professor fiscality declared many years ago, this remains true to this day. I would dare say that is has gotten even worse since our college days. This means that a fun car is not something everyone can afford, mainly due to high taxes on all vehicles with an engine bigger than a lawnmower. Combined with the ever increasing cost of fuel. Luckily some brands make a serious effort to build relatively affordable sports cars. Is the Swift sport one of those cars? You’ll find out in this review.

We’ll start by giving a shout out to the previous model of the Swift Sport, which gave us lots of fond memories, mainly in rented stripped out model on the Nürburgring. Quite a few cars, even those with a lot bigger engines, saw us zipping past in that feisty car, mostly in the corners. However that is a tale for a different time. 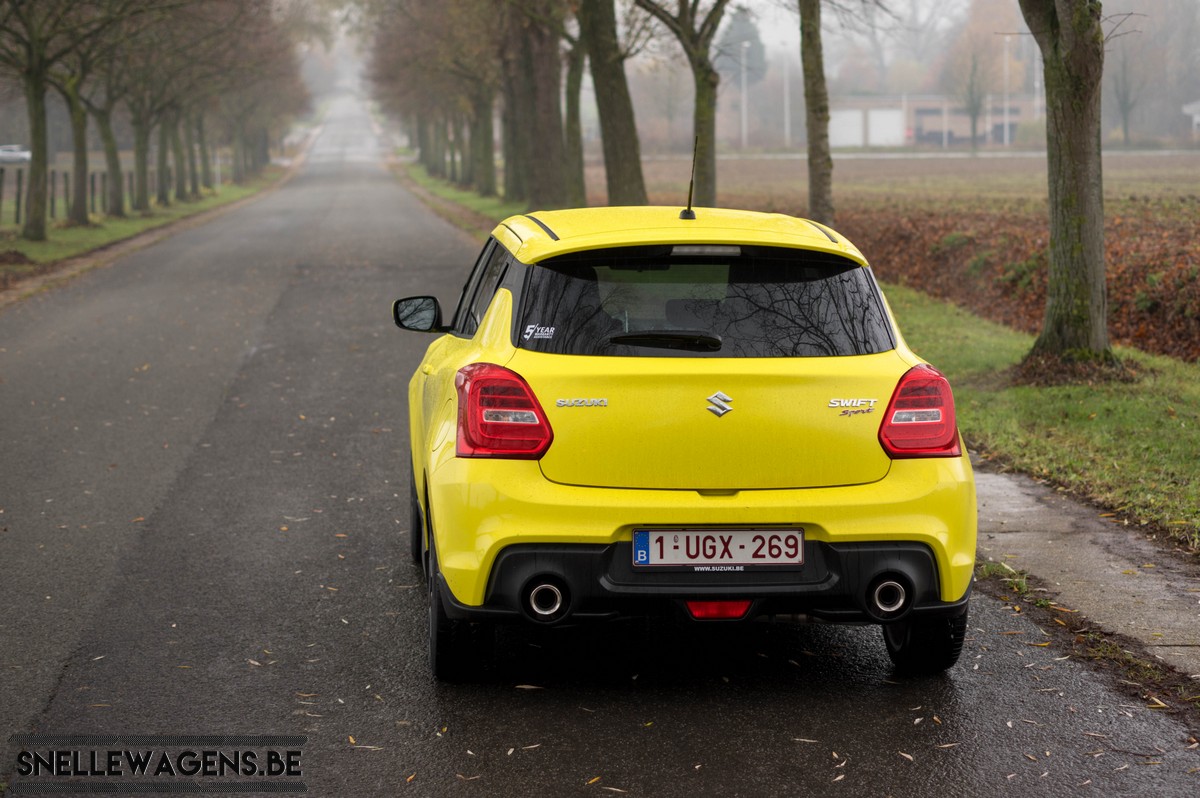 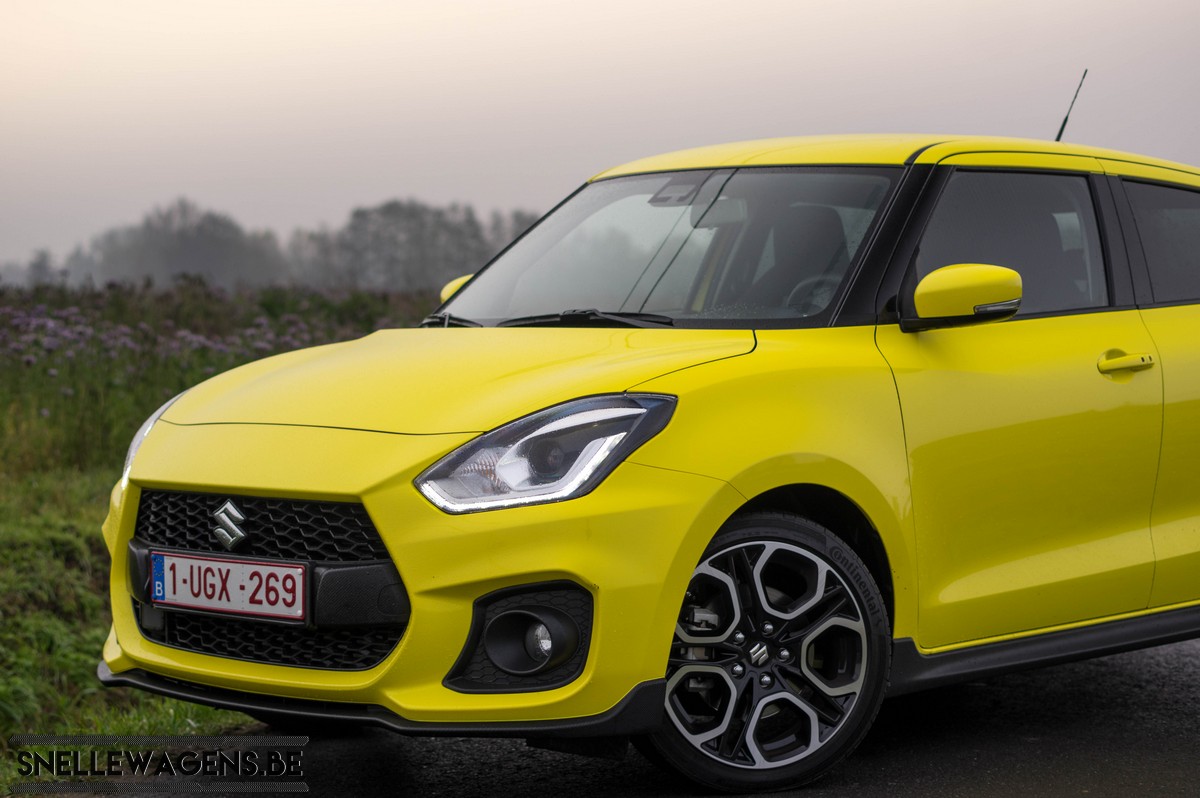 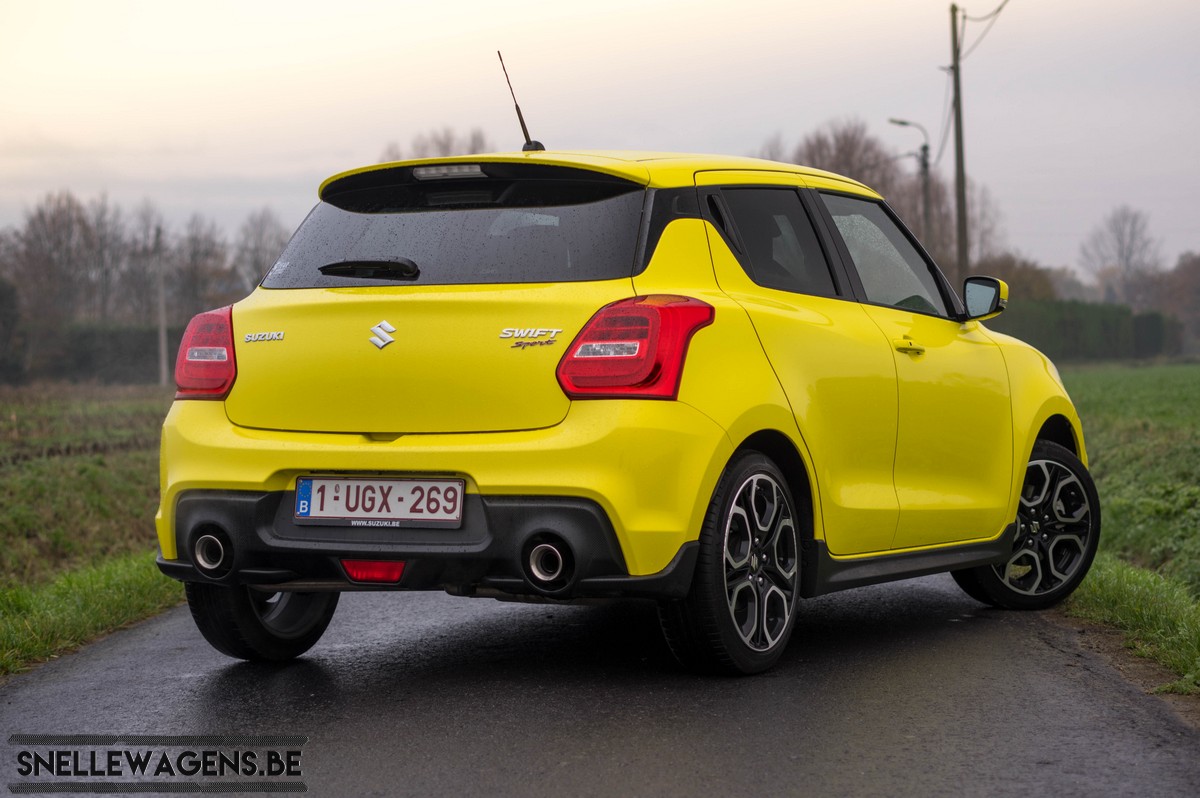 The new Swift Sport is equipped with a turbo, which is the biggest difference with the former model. This means some added positives and negatives.  The biggest advantage is a lot more torque at lower RPM, the maximum torque outpout is available at 2500 rpm. That makes a big difference, especially on the highway, you accelerate swiftly even without dropping down one or two gears. Most city cars struggle with this, mostly they aren’t great for long distance driving. The Swift Sport is quite comfortable for long trips, thanks to the power output, comfortable semi cup seats and the adaptive cruise control. This means the Swift Sport is a great allrounder and as final benefit the turbo manages to get the CO2 output down from 147 grams per km tot 125 grams per km.

Obviously a turbo isn’t all good, in this case it means you can’t rev the car up as far as before, which means you’ll have to shift quicker. You can push it to 6000 RPM however the torque gained because of the turbo cancels out the need to push the car all the way to the rev limit. The previous model had to be kept above 4500 rpm to have a sporty driving experience, which isn’t necessarily a bad thing. Basically the car has a different personality. Which personality is the better one is truly an individual preference. A turbo tends to muffle the engine sound, which is a good thing in a high end sedan but a bad thing in a sports car. You only get some engine sound when you push the engine beyond 5000 RPM, so here’s your excuse to do so.

With a 1.4 turbo engine it’s obvious that you aren’t going to break any speed records. The only way to make a modest power output (140 HP) work in a sports car is to keep the weight down. They managed to shave off another 80 kg from the last generation which brings the weight down to 975 kg.

In a straight line it’s not exactly lightning fast, a sprint from 0 to 100 will take about 8 seconds, but considering the Swift Sport isn’t intended for drag racing we shouldn’t really care about it’s sprint time. It doesn’t feel slow when you drive it. Let’s be fair, you don’t call a Ferrari a bad car because you can’t transport a dishwasher with it. 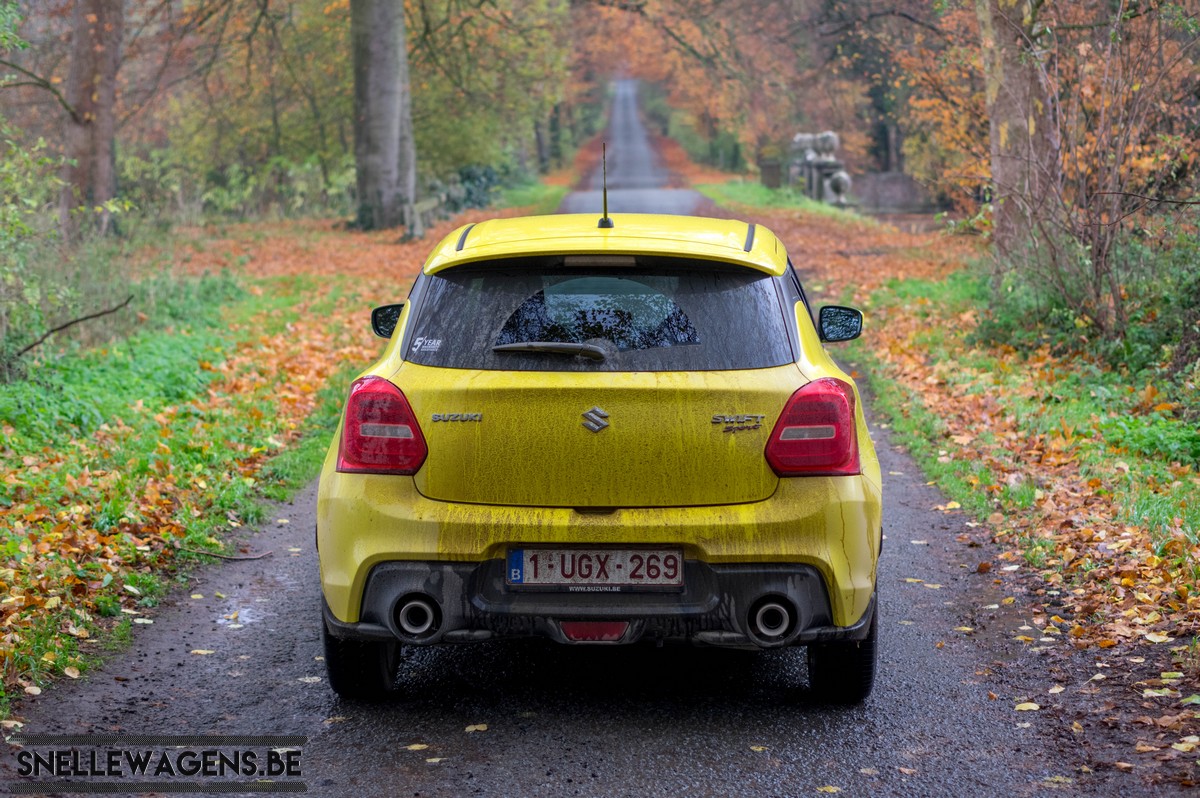 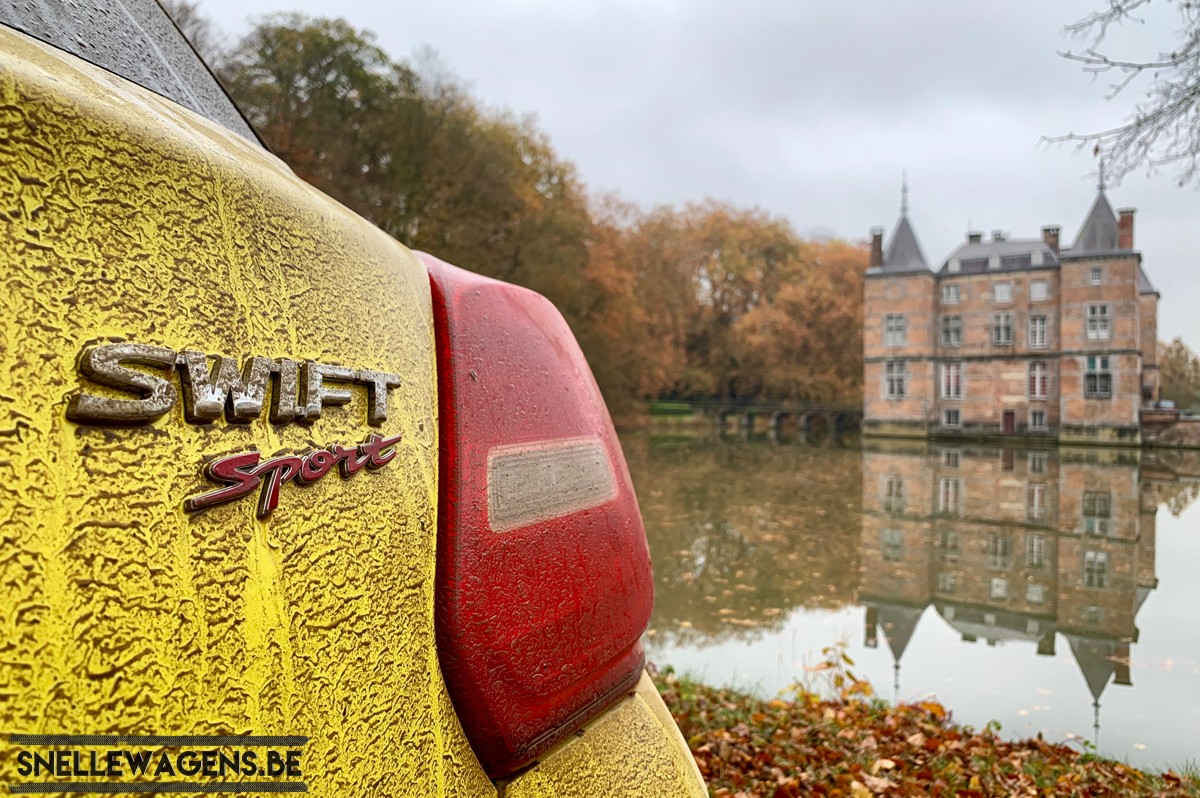 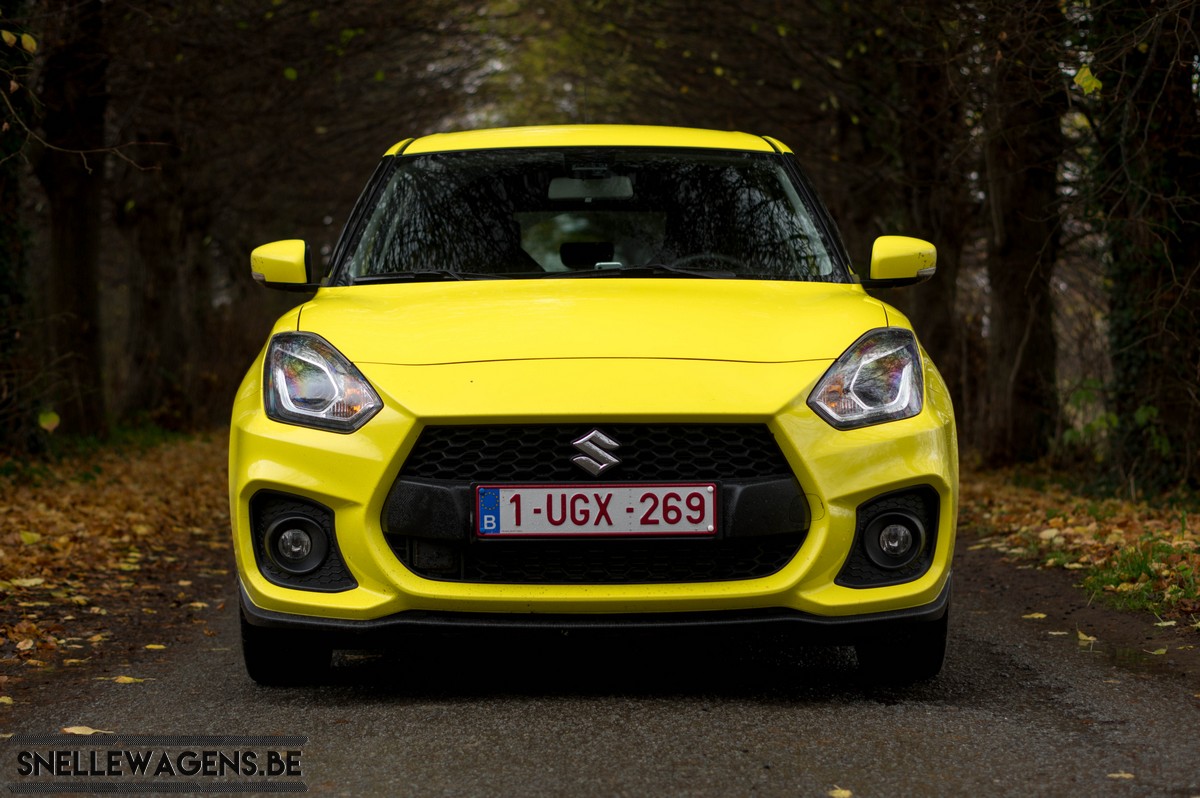 So even though we say goodbye to the naturally aspirated engine, the biggest positive about the previous Swift Sports is still around: a fool proof sporty sensation. It’s the perfect introduction into the hothatch segment. The perfect car to take out to the backroads and throw it around corners at legal speeds, you’ll have a blast while you’re at it.  It’s eager into the corner and it’s just as eager to get out of it. No need for extensive driving experience, you just put your foot down and steer it through the corner. Even on a wet and muddy road it holds its own, it’ll slip and slide a bit, but not in a scary way. It kind of resembles the original Golf GTI, a light-weight fun car and unpretentious. If you take a potent hothatch like the Hyundai I30N for a spin and floor the pedal in second gear, the way you do with this Swift Sport, you better have some Stig skills because it won’t be as forgiving.

In the city environment it fits in perfectly, it does everything you expect from a city car and thanks to the modes dimensions and rear view camera make it perfect to park even in a tight spot. The analog speedometer is a tad ambitious and goes up to 260, which makes it hard to read the 50 per hour mark. With a press on the button you can display all sorts of information between the rev-counter and speedometer, turbo pressure, oil temp, G-force mete and lots of other stuff. But a digital speedometer, they forgot that one. I also really missed a physical volume button. 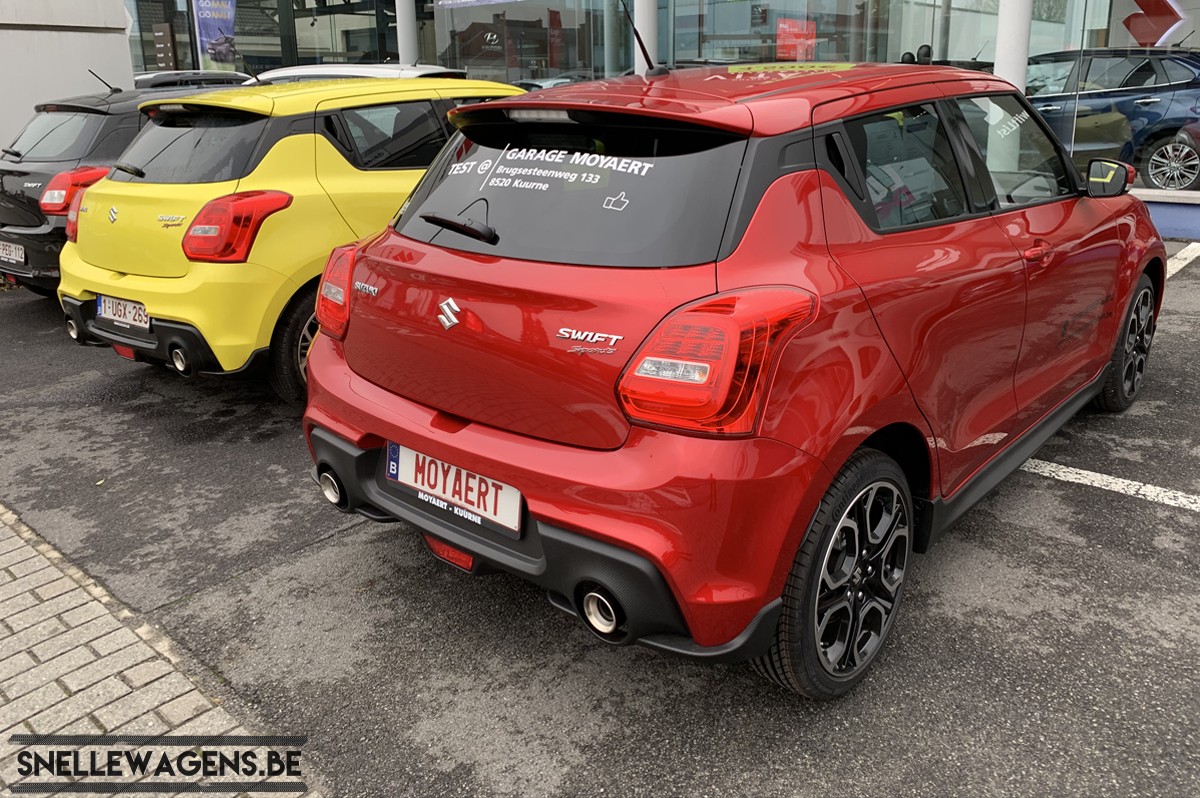 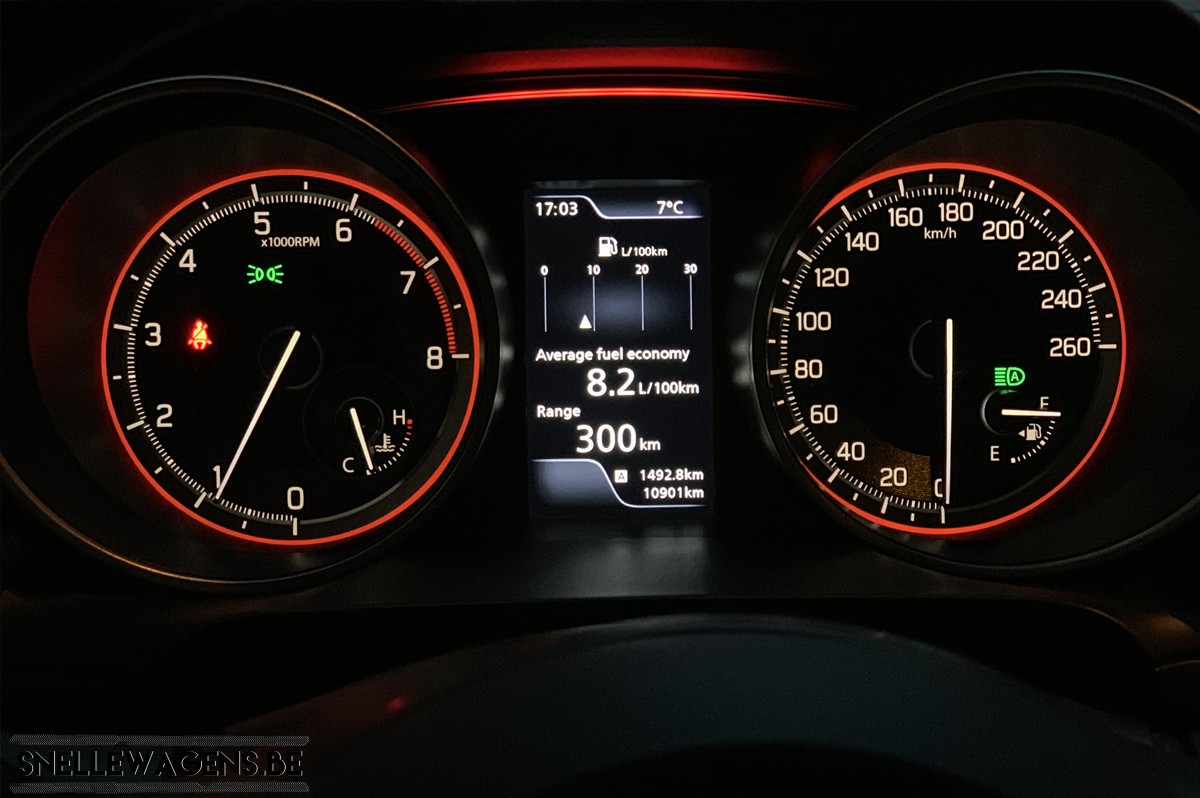 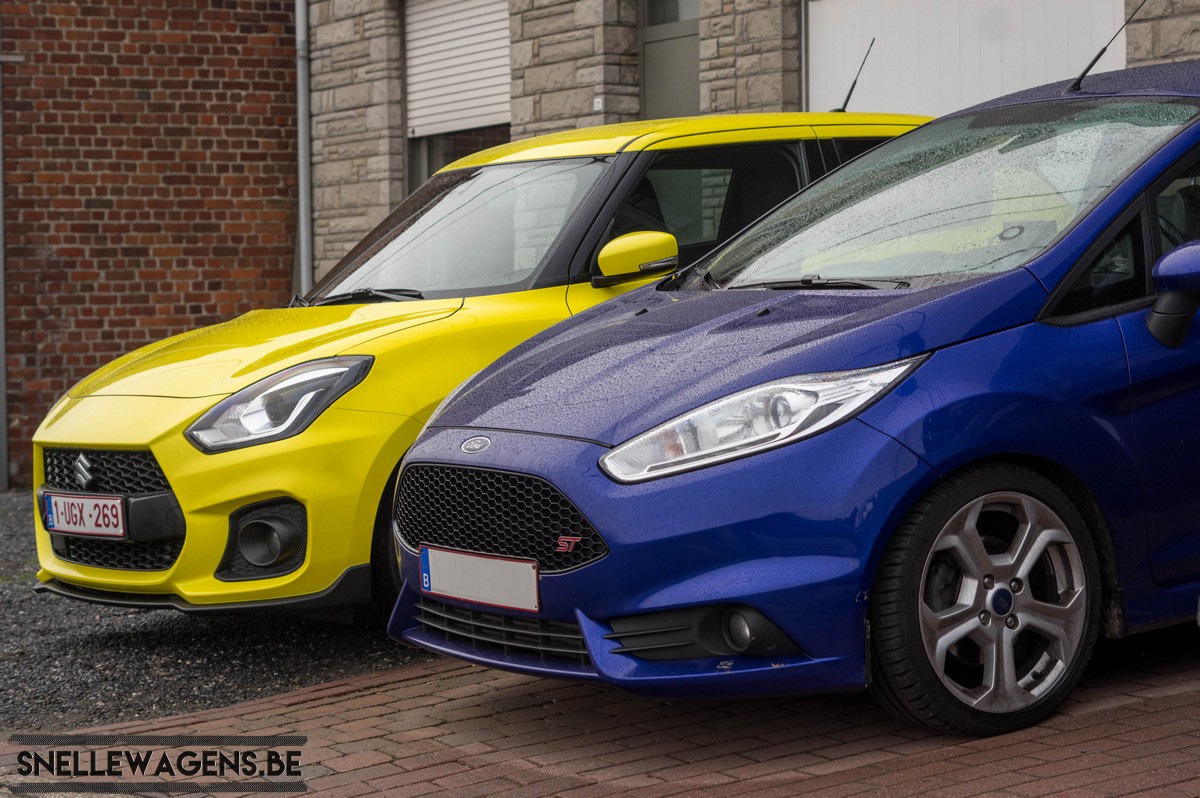 The designers really nailed it, the managed to present a fresh design that is easy to identify as a Suzuki Swift. The color of my testcar  (Championship yellow) is probably not the most popular box to cross on the order form (I’d go for red!).  There’s not much boxes to cross anyway, because the car is standard pretty much full option. Which isn’t the case with the most obvious rivals the Abarth 500 and the Ford Fiesta ST.  Just a few of the included options:  heated front seats, climate controle, 17-inch wheels and a lot of driving aids: rear view camera, collision warning, lane departure warning, adaptive cruise control. A lot of bang for your buck, but sadly this also means a big price increase, it’s listed in the catalogue at € 24.000, minus discounts it should cost around €22.000. 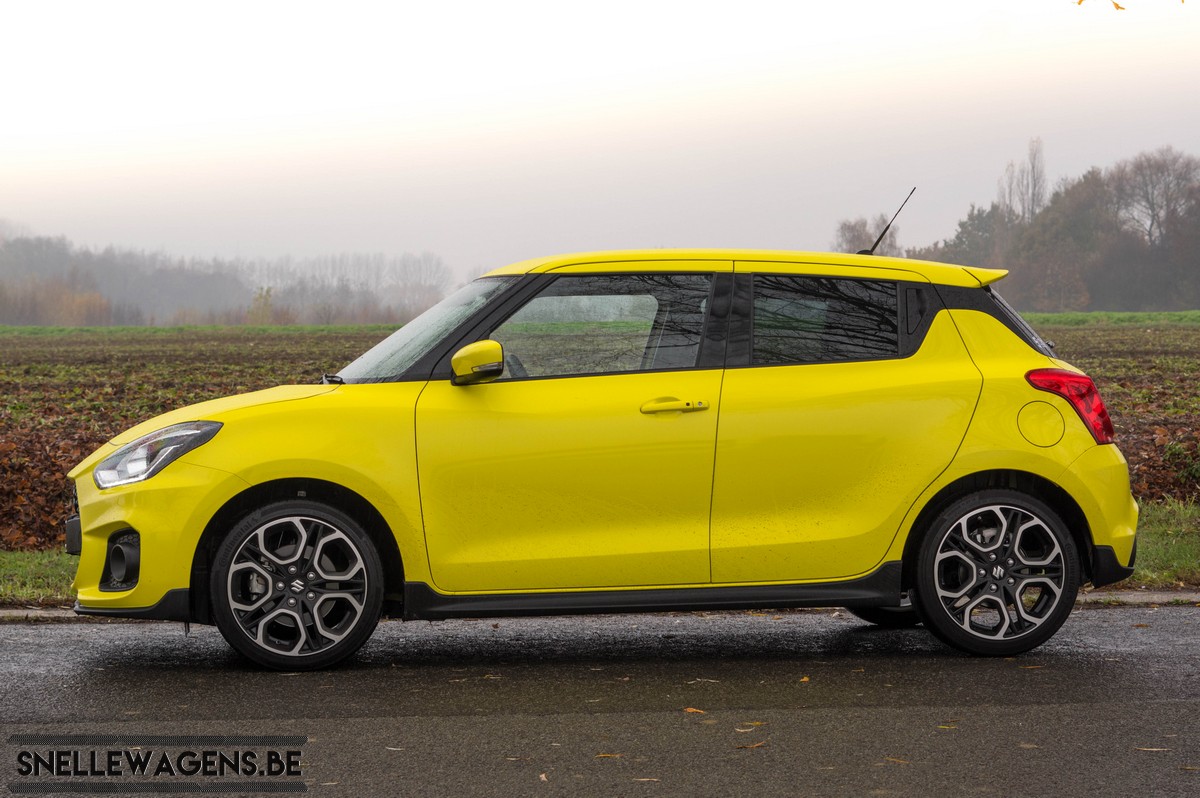 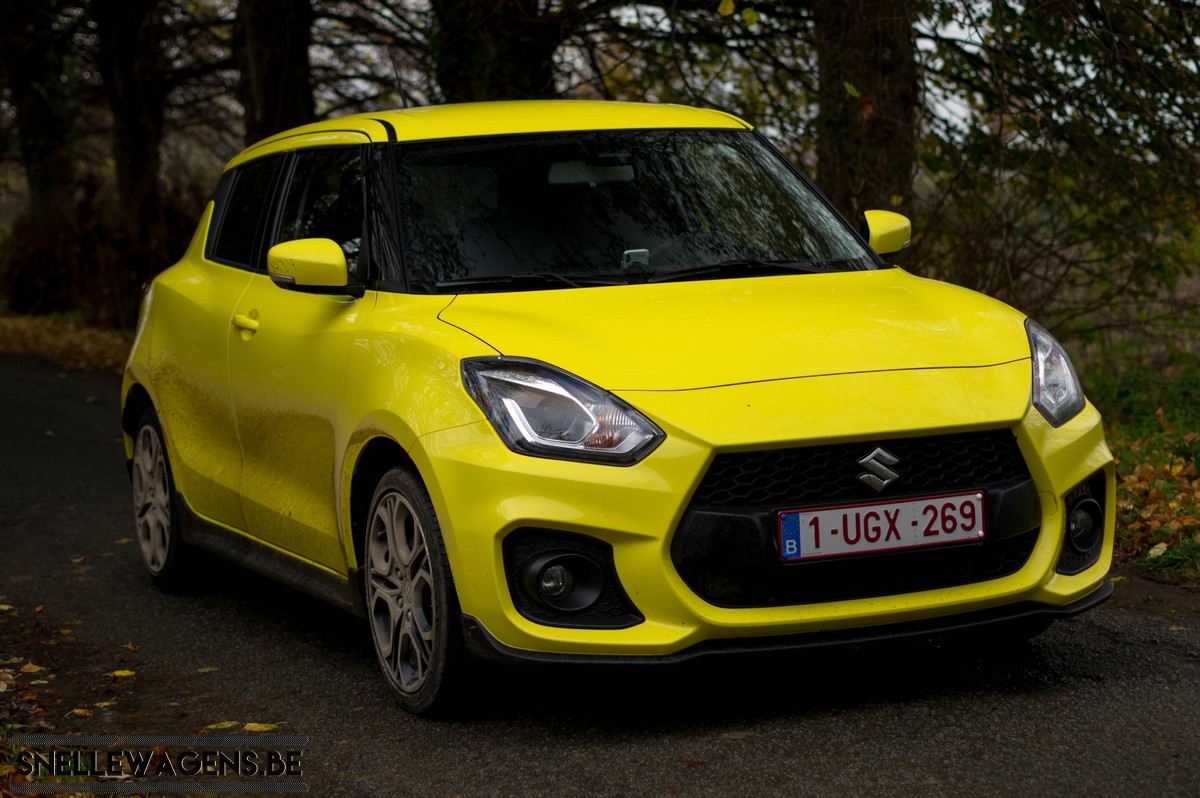 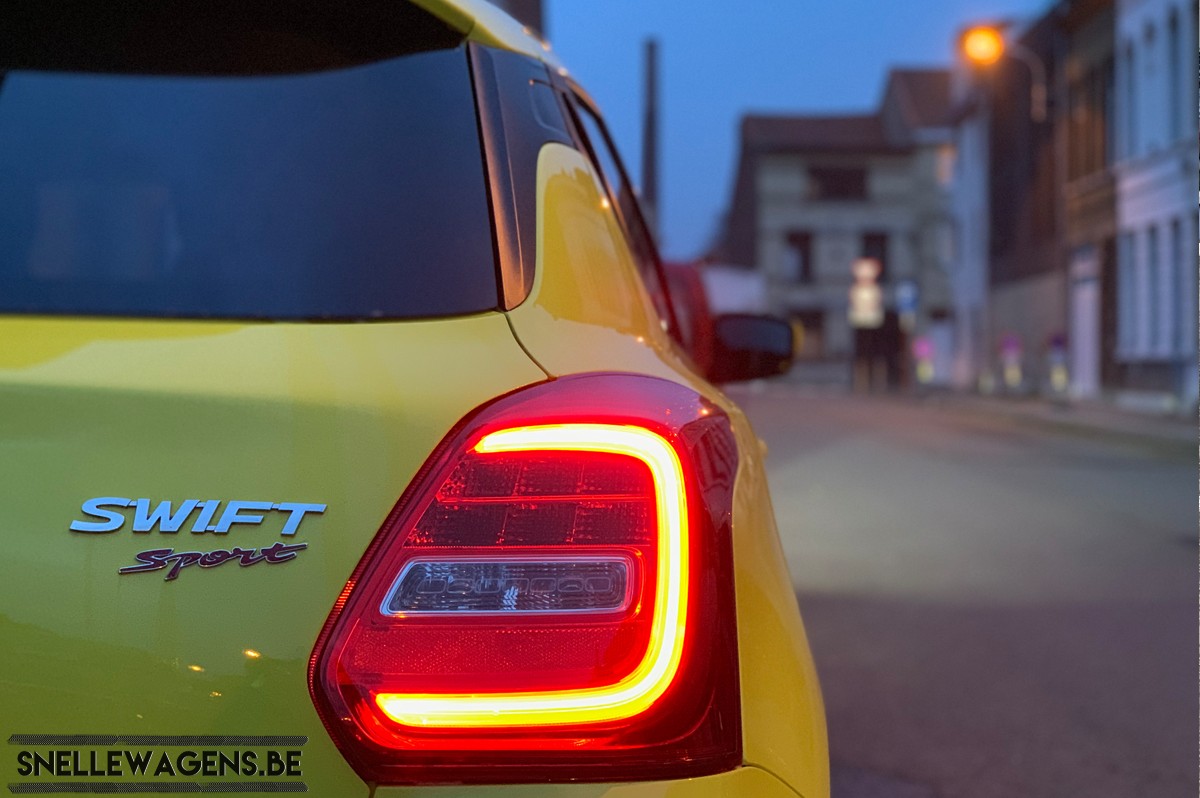 They could’ve spent some more time tweaking the basic systems like the multimedia system, before introducing all kinds of more advanced gadgets. To be specific: Playing music from spotify doesn’t work through bluetooth, you can use an aux cable, if your smartphone still has an aux exit. But then your battery depletes rapidly. So connecting through USB is the better choice, using apple car play was a bit precarious as it takes more than a minute to connect and at times it simply refuses to connect. The Millenial generation expects a decent multimedia system. In Suzuki’s defense all those added safety gadgets do help to keep the insurance price down, which is also important for the younger generation. So It’s hard to pick a priority.

Conclusion: the phrase “less is more” has been out of fashion for a while now in the hothatch world. The Swift Sport proves that you don’t need 200 or 300 HP to have fun in a hatchback.  Calling it a hothatch is a bit much but it’s definitely one of the best baby-hothatches.  I personally think they should’ve called it the  “Sporty Swift”,  which is a better fitting name. It’s not a full blown sportscar, but that’s not a bad thing, not everyone has the skill set to deal with one of those. Suzuki delivers a fun car for daily use, which fares well in and outside the city environment and is quite capable to cover long distances on the highway. The price is a bit higher than before, but that doesn’t mean it’s expensive. And the running costs are even further from the term expensive. It’s obviously not perfect, but it’s flaws are easily forgiven because of its charm. Overall Suzuki delivers a great all round sports hatchback!